Flat Containers (P0038R0) by Sean Middleditch gave a good overview of what flat containers are and how might they be designed. This paper aims to answer the questions posed in Sean's paper, focusing-in on a specific design for the standard.

A coded implementation can be found at https://github.com/pubby/flat.

Any vector-like sequence container can be used by flat containers:

For convenience, the typedefs vector_set and vector_map are provided as aliases for std::vector flat containers.

Use these typedefs all the time.

2. Flat containers use the same interface as map and set

There's nothing to learn because you already know how to use flat containers.

Use container to gain access to the underlying container. This works because flat containers are just light wrappers around their contained containers.

There are rules regarding container, but we'll get into those later.

There are three cases where flat containers beat out everything else, bar none:

The graph below shows the performance of associate containers at sizes less than 256. Note that hash tables perform the best and linear search (displayed as 'unsorted') performs the worst. The two flat containers are displayed in black and cyan. (Side note: Linear search is really, really terrible and should stop being recommended to newbies as a faster alternative to associative containers. It's not a worthwhile optimization to make; it's just stupid.)

That quotation is from the abstract of an absolutely fantastic paper by Pat Morin and Paul-Virak Khuong called Array Layouts for Comparison-Based Searching, which details the different representations of flat sorted arrays and their influence upon performance. The paper is based on a series of binary search benchmarks written by Pat and ran by others on various types of hardware. Graphs made from these benchmarks are availible on Pat Morin's website.

Here is one such graph which shows the performance of 32-bit data on an Intel i7-4790K: As you can see, branch-free binary search performs best for sizes that fit in the cache, but Eytzinger (breadth-first) is the clear winner past that.

A brief explanation of these results

It's all due to bandwidth, prefetching, and speculative loads. It is not due to "having fewer cache misses".

The Eytzinger search algorithm is fast because it loads memory it might need several iterations in advance. Property #1 allows this prefetching to be efficient; all possible grandchildren of a given node exist in just one or two cachelines. Property #2 provides the speedup; a small number of prefetches (four) can be outgoing at once without increases in latency.

A detailed explanation of these results

Unfortunately, the Eytzinger layout is not useful as a general-purpose container. Despite being fast at searches, Eytzinger's other map-like operations slow and complicated. 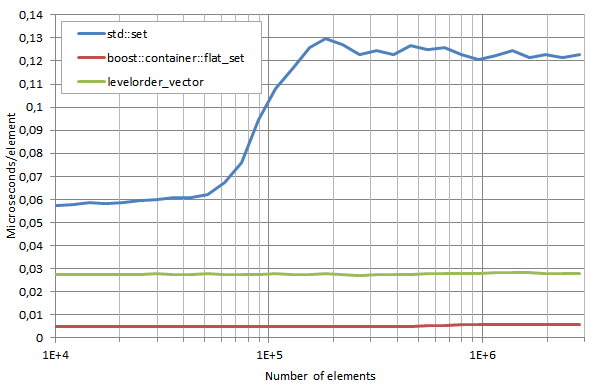 Assumptions can be made about the speed of insertion, removal, and in-order construction based on these results. Since Eytzinger layouts are perfectly balanced binary trees, such operations must do additional work to re-balance the tree. This requires at least O(N) complexity for traversing the tree, and that implies a constant factor which is at least five times that of sorted vectors.

Sorted vectors are strongly preferred from a standard library perspective. They offer good - but not optimal - performance accross all of their operations, and can be implemented using pre-existing library functions. Sorted vectors are the best choice for this proposal.

One Vector or Two?

There are two ways of storing sorted key/value pairs:

The graphs below show the performance of searching maps with these two representations. The interleaved reprentation uses std::pair value types and is thus is strongly preferred from a design perspective. Interleaved vectors of pairs mesh well with the existing standard library and containers. In addition, the container adaptor design of flat containers strongly favors single containers.

Take a look at the code below. Will it compile? What will it print when it runs?

This turns out to be undefined behavior. The most likely result is:

Boost's flat_map implementation uses a single sorted vector of pairs. Unlike std::map, the keys of flat_map's pairs are not const; they can be modified. Modifying the keys causes the vector to become unsorted, and an unsorted vector causes flat_map to break.

This problem is not unique to Boost. Loki, EASTL, and every other popular implementation have this problem too.

The search for a solution

There are possibilities to design flat container classes which are impossible to make unsorted. All such designs are based around keeping key values immutable.

There are two ways of modifying mapped values.

First, one can use the has function. has works just like at and find, but returns a pointer value instead of an iterator.

Whenever possible, use has.

Second, one can use an iterator public data member called underlying. underlying is the iterator equivalent of container and grants access to iterators belonging to the adapted container. These 'underlying' container iterators have their usual const semantics and can be used to modify both keys and values.

Like container and const_cast, use of underlying is an explicit declaration to others that you know what you're doing and you can verify that it is safe. This explicitness is what makes underlying the safer alternative to Boost-style iterators.

Yes. Going all-out to prevent unsorted states leads to verbose, hard to use container designs that are closed off from user optimizations.

It more practical to be "safe by default" than "safe all the time".

There are only three things that can lead to unsorted states:

Avoid all three and flat containers are guaranteed to remain sorted.

Always remember that std::sort followed by std::unique can be used to turn any unsorted state into a sorted state.

Permitting unsorted states in flat containers requires the standard to address and define this behavior.

The intention of flat_map and flat_set is to hold unique keys, but this is not a hard requirement of the standard. The behavior of member functions on duplicate-key containers is well defined but implementation specific. For example, using find on a container with duplicate keys will return an iterator to any one of the matching values. This matches the preexisting behavior of std::multimap.

The design of priority_queue has influenced the design of flat containers and the similarities between the two are apparent.

The ability to use static_vector and small_vector with flat containers is a major selling point of this proposal. The container adaptor interface does not add complexity or performance penalties to the library's implementation.

Users may want to use their own reference proxy containers with flat containers. For example, consider a container which attempts to implement the "two separate vectors" idea discussed in the Internal algorithms section:

If possible, reference proxy containers should be permitted by the standard for use in flat containers.

Users may want to use custom pair types. For example, consider this packed_pair:

This type can be used as follows:

If possible, custom value types should be permitted by the standard for use in flat containers.

The standard library's current container adaptors are not well-loved, and this is largely due to them having less functionality than the containers that they adapt. The fact is, there are very few cases where stack and queue are the ideal container choice. Far more often it makes sense to use vector and deque directly and gain access to all the extra functionality they provide. The current container adaptors are practically useless.

With a desire to make flat containers useful, the natural solution is to make their adapted container member publicly visible. This comes at no loss to safety; unsortedness would exist in the design regardless of whether or not container was public. There are no synchronization issues to worry about as container can be the one and only data member of the flat container classes. And by making container a public data member, several advantages are to be had.

An efficient way of storing multiple values into a flat container is to insert the values at the end and sort the container afterwards. For cases involving a single range, the flat container's insert function can be implemented to have this behavior:

Unfortunately, not all real-world situations have such clean-cut insertion ranges, and is it not always desirable for the container to sort itself after every insertion. For cases such as these, the public container data member offers a solution:

This technique is easily adapted to whatever access patterns users have.

Functions such as reserve and max_size are not part of flat container interfaces. This is not a problem with a public container data member.

Flat containers are container adaptors and so any type of vector-like container can be used. Access to container allows users of custom vector implementations to use whatever member functions they need.

Occasionally it may be desirable to iterate a container using indexes rather than iterators. While it is possible to do this using the operator[] of iterators, using container for this is far easier to grasp.

The container member can be used to copy and move directly.

This is far cleaner than adding overloads to operator=.

Are there any downsides to container?

Unsorted states exist in the design for iterators, not container. Removing container would not remove unsorted states. The container member is the one and only member of flat container classes. There are no variable out-of-sync issues to worry about.